Wat's Pig is a 1996 British stop motion animated short film created by Aardman Animations and written and directed by Peter Lord. It is a tale of two princes who are split as babies only to reunite as adults during a war. It is told almost entirely non-verbally.

Two princes are separated at birth and reunited only after a crisis grips the country. 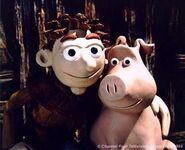 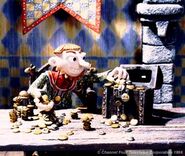 The Making Of Wat's Pig
Add a photo to this gallery
Retrieved from "https://aardman.fandom.com/wiki/Wat%27s_Pig?oldid=7215"
Community content is available under CC-BY-SA unless otherwise noted.