Start a Wiki
Wallace is an inveterate inventor and half of the title duo of "Wallace and Gromit." He is the descendant of Dug's tribe.

He delights in creating elaborate contraptions that often do not work as intended. He is a self-proclaimed genius, evident from his exclamation when he discovers Hutch's borrowed skill, a talent for all things mechanical. Most of Wallace's inventions look not unlike the designs of Heath Robinson and Rube Goldberg; creator Nick Park has said of Wallace that all his inventions are designed around the principle of "using a sledgehammer to crack a nut." Turtle Journey

Wallace can usually be found wearing a white shirt, brown wool trousers, green knitted pullover and a red tie. He loves cheese and crackers, describing them as "cracking." The thought of Lancashire hotpot keeps him going in a crisis. He enjoys a nice cup of tea or a drop of Bordeaux red for those special occasions. He reads the Morning Post, the Afternoon Post and the Evening Post and occasionally Ay-Up!, which is a parody of Hello! magazine.

Some of Wallace's contraptions actually are based on a real-life invention. For example, Wallace's method of getting up in the morning incorporates a bed that tips over to wake up its owner, an invention that was exhibited at the Great Exhibition of 1851 by Theophilus Carter, and is similar to a device sold in Japan that is used to ensure a certain wakeup time.

He has a kindly nature, and is perhaps a little over-optimistic. Nick Park says of Wallace: "He's a very self-contained figure. A very homely sort who doesn't mind the odd adventure." Wallace is loosely based on Park's father, whom he described in a radio interview as "an incurable tinkerer." He described one of his father's constructions, a combination beach hut and trailer, as having curtains in the windows, bookshelves on the walls, and full-sized furniture bolted to the floor.

In the first photo shown on The Curse of the Were-Rabbit, it was revealed that once, when Gromit was little, Wallace had much hair and beard and, on the photo that shows Gromit's graduation from "Dogwarts University," Wallace had lost his beard, but still had a little hair. The reason behind Wallace's loss of hair is unknown.

Both Wallace and Gromit live together at the ficticious address of 62 West Wallaby Street, Wigan, Lancashire. However, his accent as voiced by Peter Sallis is from Sallis' native Holme Valley in Yorkshire.

In "Curse of the Were-rabbit", Wallace sometimes wears Anti-Pesto uniform and cap. He only sometimes drives the anti-pesto van, Which is similar to Lady Penelope from Thunderbirds as Parker and Gromit always drive FAB1 and the Anti-Pesto Van

In Holiday From Home, He wears his swimming trunks and his rubber ring when he is going swimming with Gromit in the sea

His favourite colour is red

Gallery In The US and UK Edit 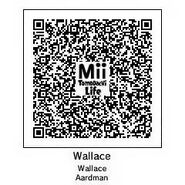 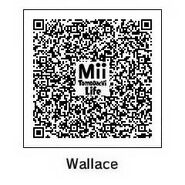 Wallace QR Code Contents
Add a photo to this gallery
Retrieved from "https://aardman.fandom.com/wiki/Wallace?oldid=7960"
Community content is available under CC-BY-SA unless otherwise noted.