Stage Fright is a 1997 stop-motion short film produced, directed and co-written by Steve Box. Tess Daulton is also an uncredited co-writer. The story follows Tiny, a music hall (vaudeville) performer, Arnold Hugh, a silent film actor, and Tiny's co-worker Daphne, as they attempt to adjust to the coming age of film. Tiny and Arnold are voiced by Graham Fellows, and Daphne is voiced by Tess Daulton. The short film is eleven minutes in length, and won a BAFTA Award for Best Short Animation Film in 1998.

A vaudevillian's act involving the juggling of dogs is no longer a hit. He and his partner must face a brutal villain and assorted obstacles in order to secure their future. 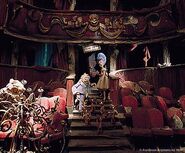 Daphne, Tiny, Mr. Arnold Hugh & Some Of The Aardman Characters 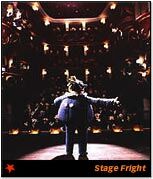 The Making Of Stage Fright 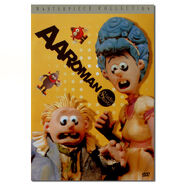 Daphne & Tiny On The DVD Cover 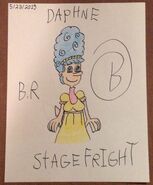